Home Blogging Internet Do You Know What Is Google Drive ?

Do You Know What Is Google Drive ? 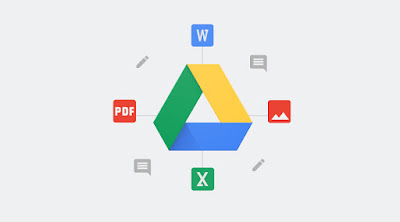 Google indeed never stopped innovating. Of the many services that are provided, one of which is profitable Google Drive. Of course all ask why profitable, because Google gives us free data storage by as much as 15 GB.

Google Drive is the online storage service or layman who owned by Google. The application was launched on April 24, 2012. The service is an extension of Google Docs was originally only provide the maximum capacity of 5 GB, but over time increased to 15 GB.

If you know Google Docs and intends to open it up it will automatically replace the URL with drive.google.com after docs.google.com enabled.

Read : A Complete Tutorial On Creating A Blog Blogspot So Professional

A free service from Google is still often disepelekan a lot of bloggers. But a lot of things that can be done with Google Drive. Its main advantage, because it take shelter under the flag of Google. Of course all know already, the search engine giant is still not unparalleled in the area of technology today.

Google Drive is basically similar to Dropbox, i.e. the ability to synchronize data via a special folder in the desktop or better known as Desktop Sync Clients.

Read ; The Importance Of Doing Keyword Research For Online Business

But the advantages of using Google Drive is much larger than using Dropbox. Where are the files stored of course integrated with other Google features, such as Gmail, Google Search and Google +.


You can save any files on Google Drive. Google online storage space can accommodate anything, get photos, stories, designs, pictures, recordings, videos and just about anything. The mobile version is provided also makes it easy to access those files anytime and anywhere at any time.

Read ; How The Most Powerful Keyword Research For Online Business

One thing that makes Google's Drive to become the choice of many bloggers or webmasters because it features a mempuni i.e. bawaanya API's for developers. This feature becomes superior due to Google Drive has been connected with dozens of third-party applications.


Similar with Dropbox, Google's service Drive are also not free forever. Though it provides a storage capacity of 15 GB, however the service was able to be increased up to 100 TB. But with a proviso, all have reasonable prices. 15 GB of free storage and can be added to a specific payment.