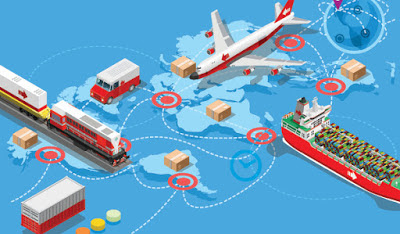 What is the understanding of international trade and what is the benefit of the economy in a country? For those who learn about economics, of course it is familiar with this topic because it is quite often discussed.

International trade is an interstate interaction in the form of selling goods or services on the basis of mutual agreement. International cooperation in the field of trade is not a thing that has just begun, but it has been around since medieval times.

Economic relations between countries include three forms of relationships, including:

One of the objectives of international trade is to increase GDP (Gross Domestic Product) or the total value of production of goods and services within a country for one year. The impact of international trade can be felt in terms of social, political, and economic interests to help drive the advancement of industrialization, transportation, globalization and the presence of multinational corporations.

Trade can be interpreted as a process of swinger that occurs on the basis of a mutual agreement of the parties involved in it. Countries in the world have not been able to produce all of their own goods and needs, they should receive assistance from other countries.

From the explanation, it can be concluded that the understanding of international trade is the trading activities made by one country with other countries, where this happens as a result of the limitations of existing resources of the country. Inter-state trade plays an important role in fulfilling the needs of a country that cannot be produced in the country, whether it is due to limited natural resources, human resources, capital, or skill.

Thus inter-state trade allows the occurrence of:
Other Articles : Some of the things that must be understood when starting a Business

The following are some of the driving factors of international trade:

1. The existence of free market

Economic freedom or liberalism has begun to be implanted in international trade. Anyone has the right to upgrade and expand their market to sell cross-country products.

Free markets are needed to improve cooperation between countries that have the opportunity to increase country revenue. Economic freedom is a trigger for individuals and groups to compete to increase market and increase production.

2. The difference in geographic conditions

Each country has a different geographical state than other countries that cause differences in the resources it generates.

For example, spices are only obtained in tropical areas such as Indonesia, so Indonesia becomes the largest supplier of spices in some Western countries. Every country can not fulfill all the resources needed so it is necessary to do exchanges with other countries.

Nowadays, to interact with other countries, we do not have to meet face-up, because all communication can now be done with Internet-based information technology.

The development of digitization and communication equipment triggers each country to increase its production to be marketed to other countries assuming that the country cannot provide such goods or services.

Likewise, if a country only advanced in technology without the supply of natural resources, it needs the help of other countries. This is the role of a mutually beneficial international trade

International trade is assessed to produce a wider market and more revenue than if it is only produced domestically. So that production in large scale can certainly save the cost to be spent on production (fixed cost).

The most common form of international trade. There are two ways to export, i.e. regular exports (through applicable provisions) and exports without L/C (goods can be delivered via the Trade department permit).

Consignment is a sale with delivery of goods abroad where there is no particular buyer abroad. Sales can be made through a free market or trading exchange by means of auction

Trades made through trade agreements with other countries.

Trade arising from two adjacent countries to facilitate the residents to make transactions with each other.

International trade is an important agenda of a country not just commercial gains, but also in terms of cooperation between nations.

Other Articles : 5 ways to start a profitable Online business for beginners

Above is an explanation of international trade understanding, benefits, types, and the supporting factors. Hopefully this article adds to our insight into the benefits of international cooperation and matters relating to the topic.
Facebook Twitter Telegram